The pandemic has impacted U.S. consumer finances and attitudes in a major way. Furloughs and layoffs turned the financial health of some households upside down. Ever-changing conditions created market volatility. And, in turn, sparked a “flight to liquidity,” as consumers moved funds to keep more cash on hand. Even economic stimulus—intended to spark spending—inspired many households to save and pay off debt.

However, the level of impact and consumers’ ultimate change in behaviors depended on their affluence levels and age groups. That is why, as marketers consider their future strategies and investments, they must fully understand what their consumers have endured since the pandemic’s start.

In this year’s Wealth Trends report, Equifax examined COVID-19’s effect on consumers, including their financial, emotional and mental wellbeing. What we learned will help you better understand consumer mindsets going forward, as well as the optimal ways to reach and engage your target customers.

Between March and April 2020, the Bureau of Labor Statistics reported that over 22 million payroll jobs were eliminated—an unprecedented 14.7% drop. Though a substantial recovery began in May, 9.8 million jobs remained lost through January 2021—1.2 million more than at the worst point of the Great Recession.

Industries that were hardest hit include:

Despite widespread job loss, income and assets increased in aggregate across all age groups. Total investable asset levels rose from $44 trillion to $48 trillion. Most of this $4 trillion increase went to affluent households.

Stimulus payments helped many households. The CARES Act provided Economic Impact Payments (EIPs) of $1,200 per federal taxpayer and $500 for each dependent child. It expanded and extended unemployment benefits, including benefits to self-employed people, gig workers and others who are not normally eligible for unemployment insurance coverage.

All told, federal unemployment programs put an additional $583 billion in unemployed workers’ pockets. While recipients spent the majority of their economic payments, data revealed that many households used their stimulus to alleviate economic hardship or reduce future risk. Equifax and the Federal Reserve Bank of New York found that consumers paid down an unprecedented $118 billion in credit card debt in the first half of 2020.

Consumers’ deposits also increased as a share of total assets. This “flight to liquidity” crossed all demographics, reflecting consumers’ desire for ready cash in uncertain times. 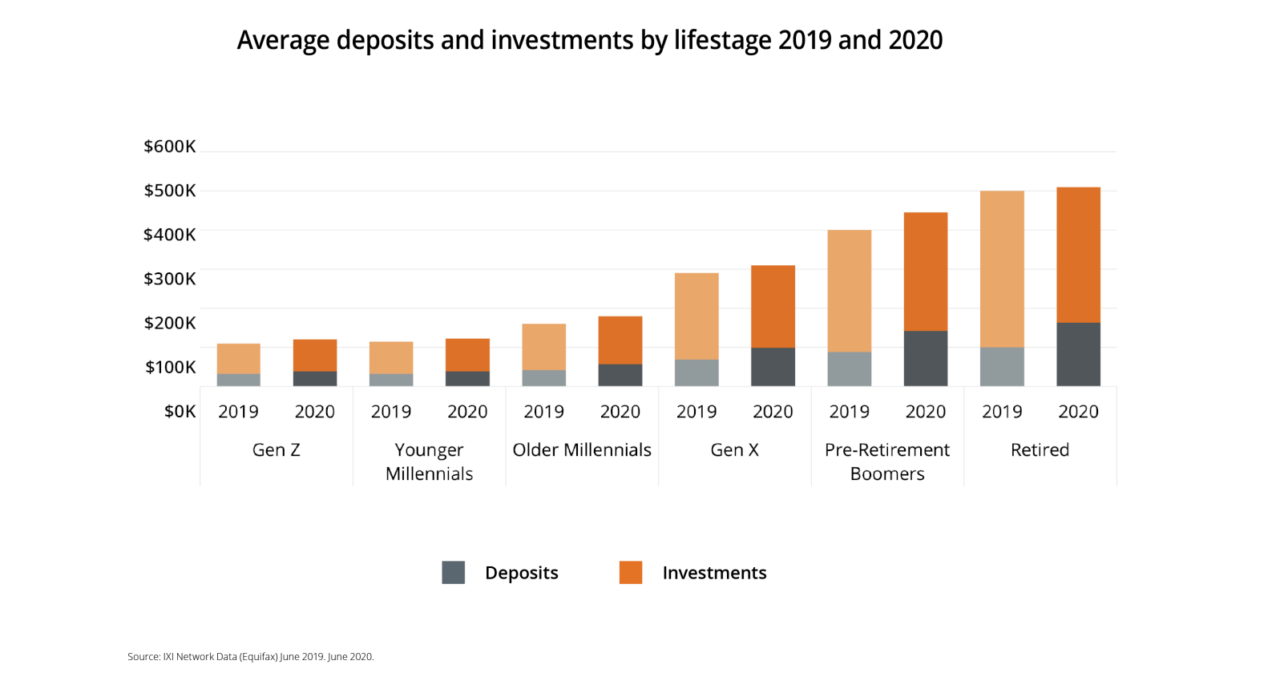 An August 2020 survey by the Federal Reserve Bank of New York found that households planned to spend less and save more of any future stimulus payments. 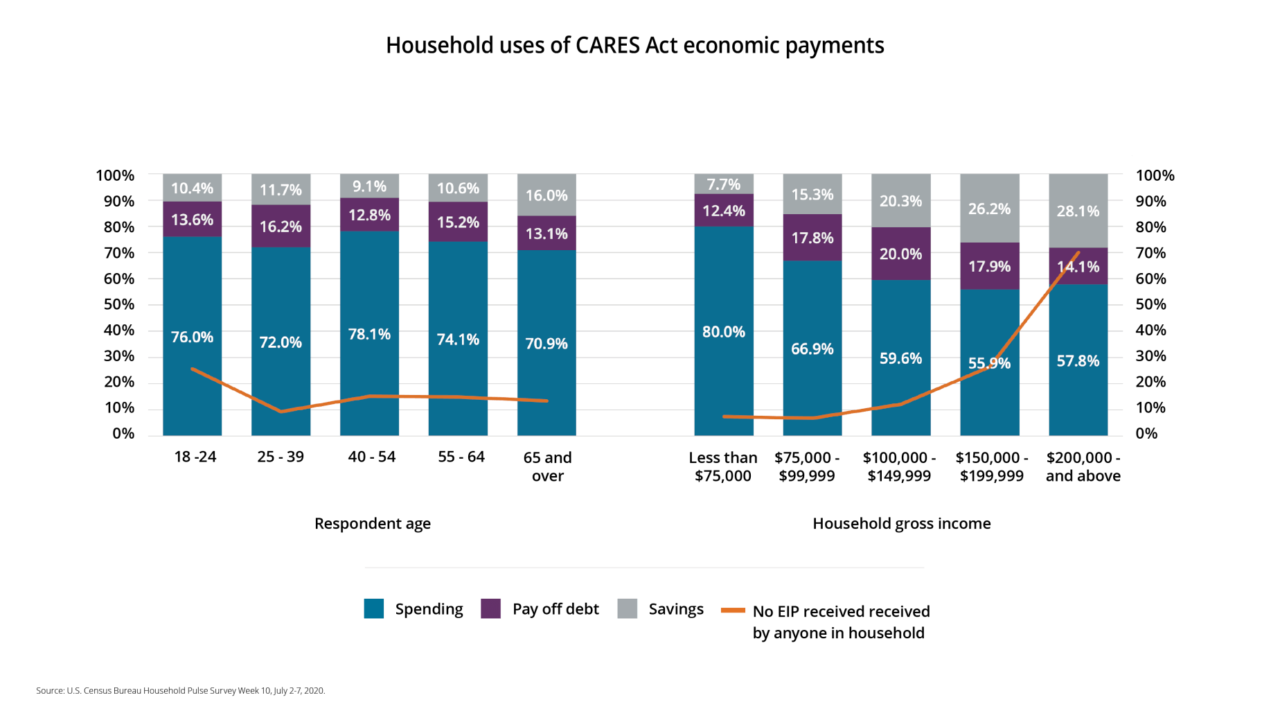 Despite stimulus payments and total growth in assets, consumer confidence and overall outlook remained shaky. The volatility surrounding the pandemic created an ongoing state of uncertainty. The uncertainty then trickled down into consumers’ perception of their financial health.

The year-over-year comparison is staggering: According to The University of Michigan Surveys of Consumers, at the end of 2019, more than 50% of consumers 18-34 said they were “better off” than the year before. Meanwhile, 40% of consumers aged 35-54 said the same.

As the pandemic and its effects continued to spread, the net positive index declined across all age groups. The decline fostered a more negative outlook on financial futures. The 18-34 age group became more optimistic at the end of 2020. However, expectations among those aged 55 and older hit their lowest level in December 2020. 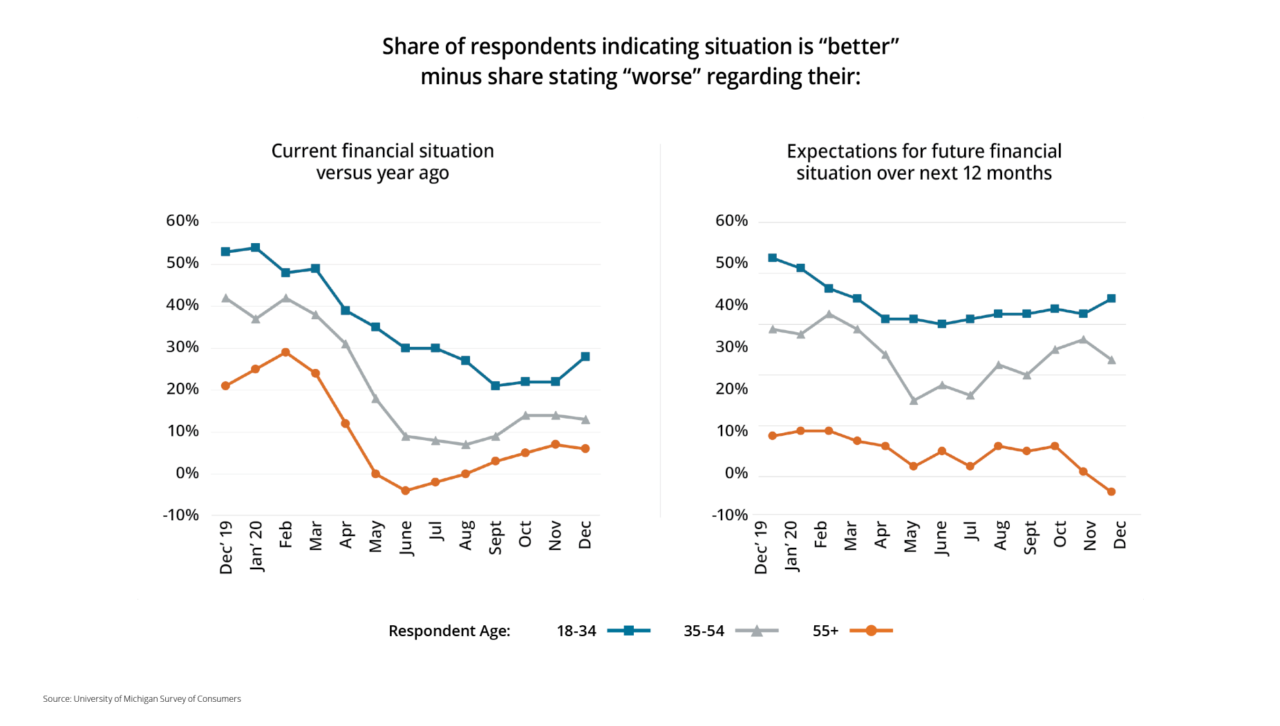 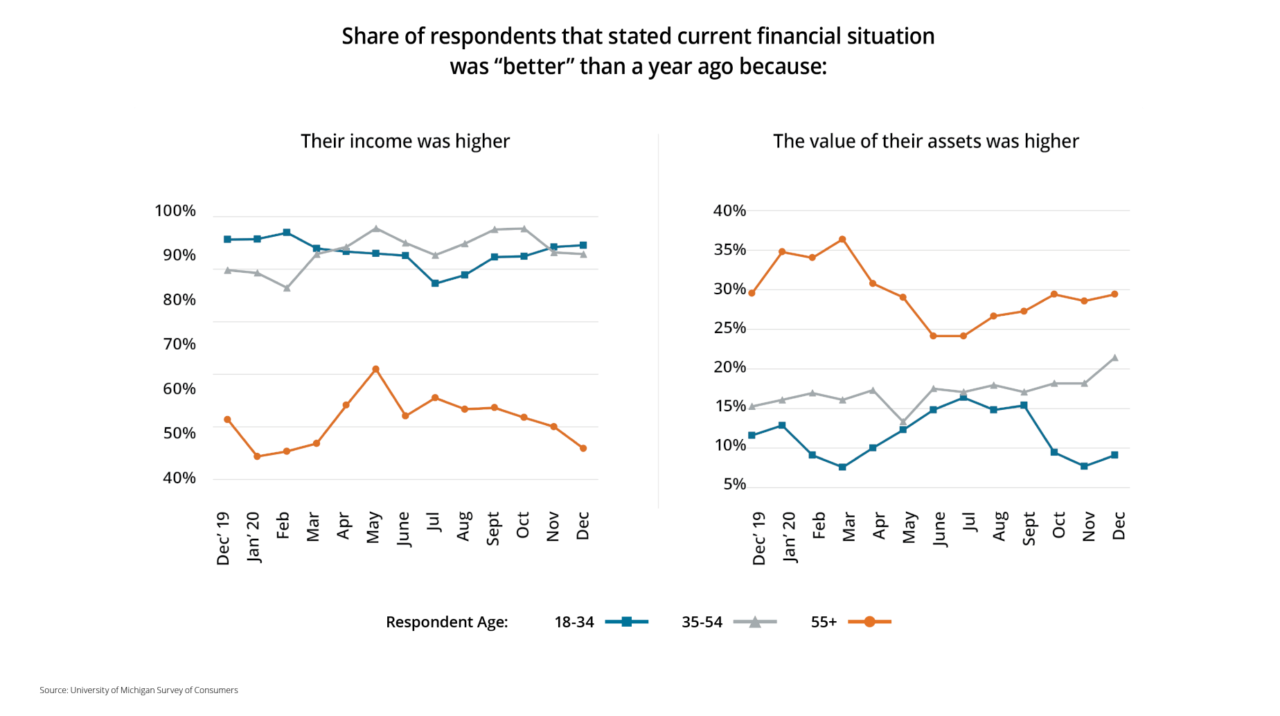 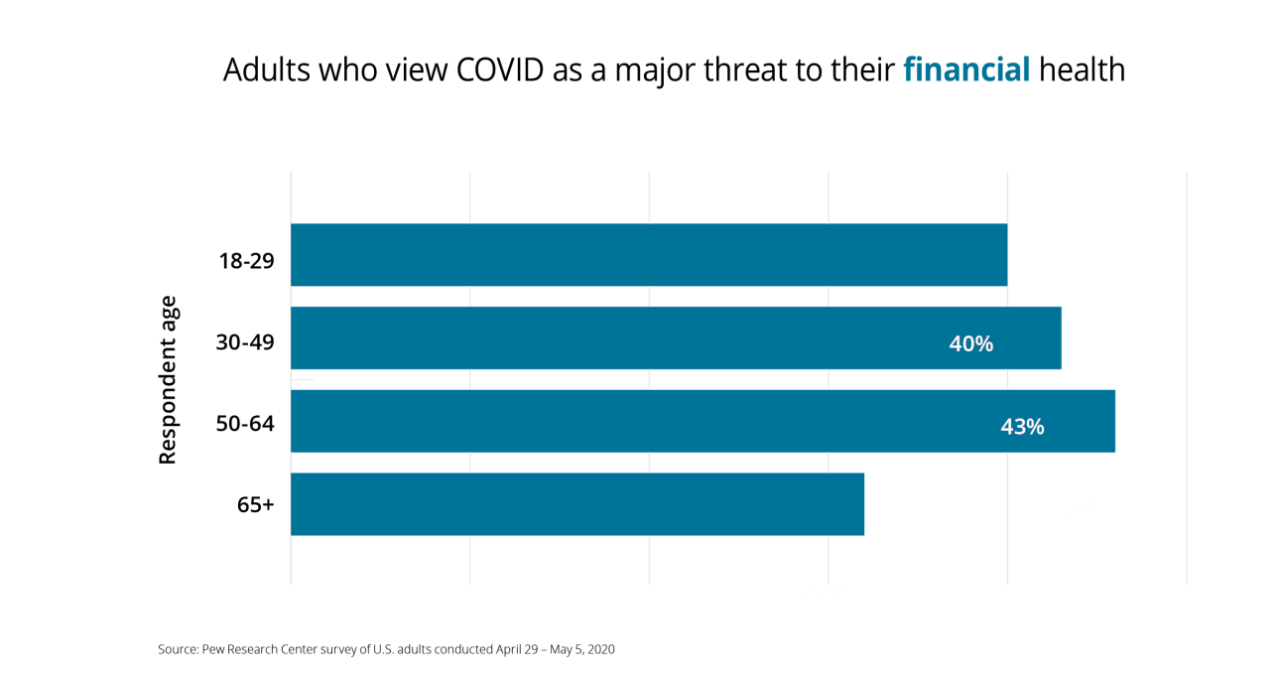 Unemployment was spotlighted as the reason behind many of these financial worries. Among consumers aged 64 and under, more than 30% had experienced a wage cut. Meanwhile, more than one quarter said they or someone in their household had been laid off. 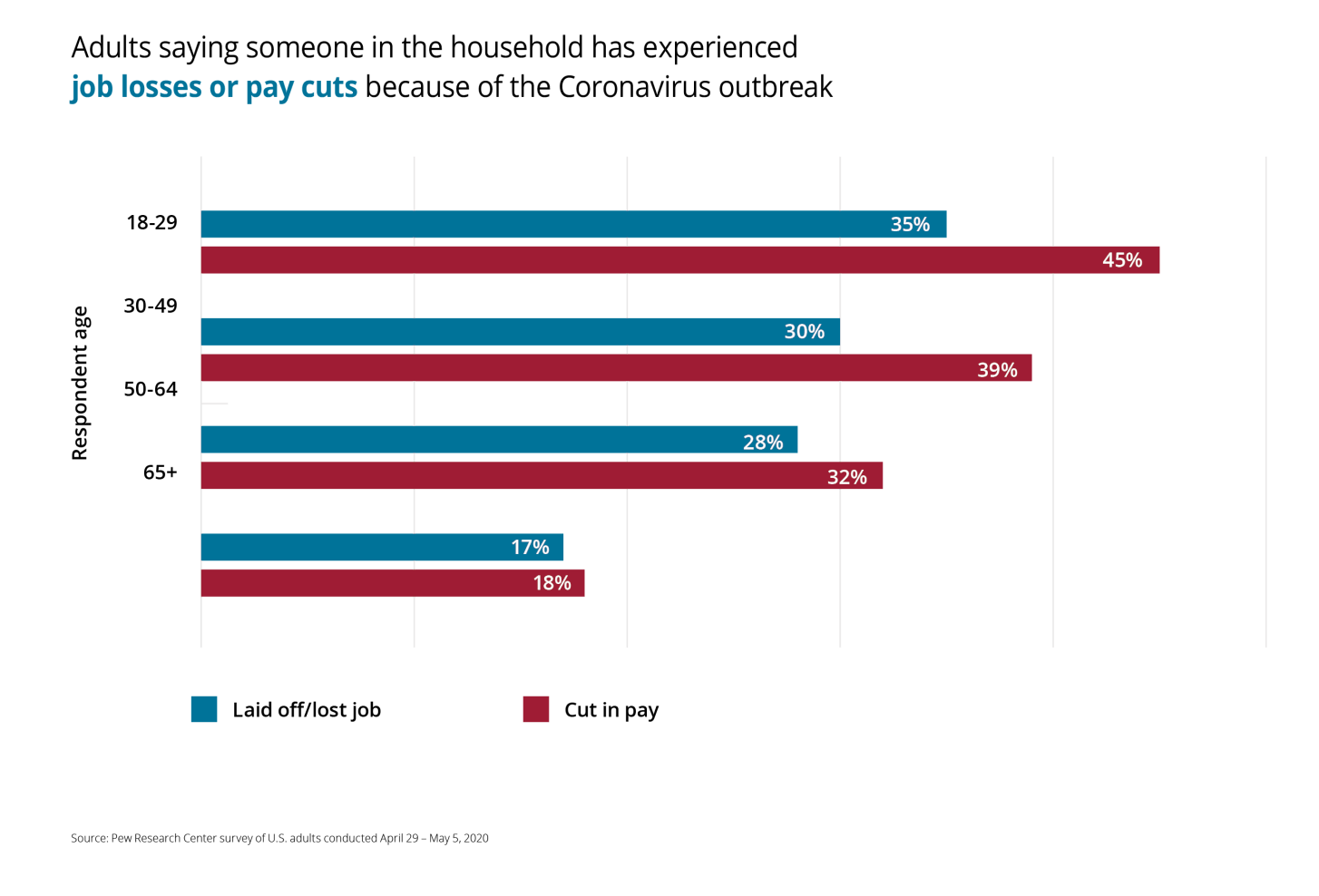 Given ongoing concerns about household employment and finances, it’s not surprising that consumers’ mental health has suffered. In the Census Household Pulse Survey (CHPS) conducted between January 20 and February 1, 2021, 35% of respondents reported anxiety and 23% reported signs of depression most of the previous week.

Young adults, millennials and retirees reported feeling more emotional stress than other age groups. Consumers making $75,000 or less were more likely to feel anxiety than other income levels. But pandemic-related stress ultimately affects all demographics: Those making more than $200,000 were just as likely to report feeling depressed as those with household incomes between $75,000 and $100,000. 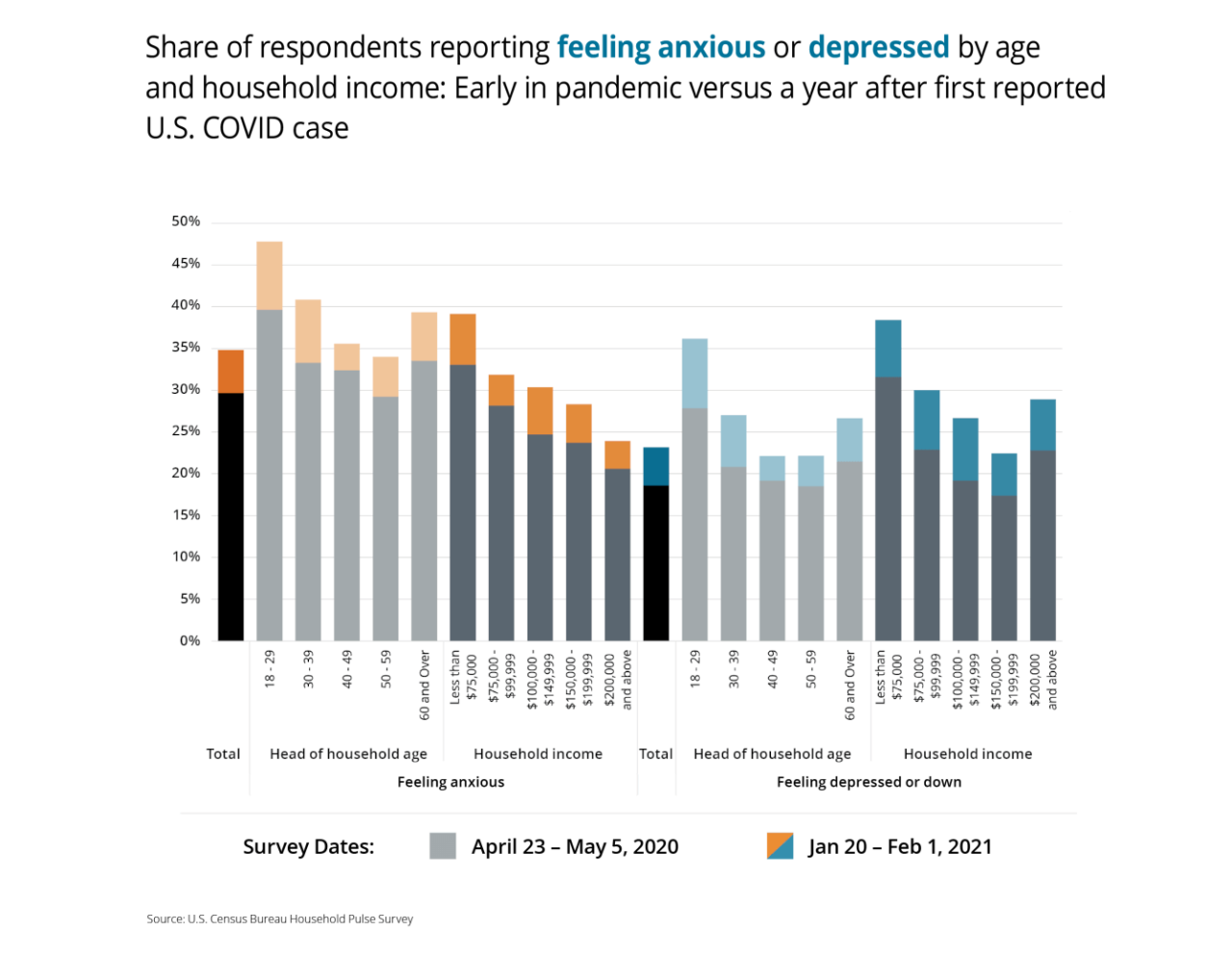 Despite the challenges consumers have faced over the past year, there is light at the end of the tunnel. The $1.9 trillion American Rescue Plan delivered additional economic assistance to consumers, with a focus on those at lower income levels. This left Americans with nearly $2 trillion in disposable income. This was as as result of reduced consumer spending during the pandemic, combined with this additional economic support.

However, the path to economic recovery largely hinges on vaccination rates. Based on the current rate of vaccine distribution, Keybridge Research suggests that herd immunity could be reached as early as May 2021. This shows great promise for businesses across industries, especially those hit hardest during the pandemic’s peak.

For instance, the Conference Board’s preliminary Consumer Confidence Index for February 2021 found that consumers’ intentions to travel. This included travel by plane and outside of the U.S.—have increased. As vaccine delivery accelerates and confidence grows, consumers may change their initial plans to save and instead release pent-up demand.

It is up to marketers to recognize and unlock those opportunities for their business. Consumer spending behaviors are driven by a combination of logical and emotional factors. Top-performing marketers know that in order to create campaigns, messages and experiences that truly resonate, they must understand their audience on a deeper level, including which factors influence them most. Empathy and compassion both came into the spotlight in 2020, but it will continue to play a critical role in efforts to win consumer trust—and business—as we emerge from the shadow of COVID-19.

Ian Wright is a product and strategy executive with more than 20 years of experience driving and deploying successful DaaS and SaaS solutions. He currently manages Identity and Insights portfolios for Equifax’s marketing business. Wright previously led product strategy and innovation efforts across marketing, addressab[...]
View More From This author
Modal