Light at the End of the Tunnel

There are two main reasons for the optimism, said Cris deRitis, deputy chief economist at Moody's Analytics, during our April 15 Market Pulse podcast, “Growing Optimism and a Rising GDP.” First, the U.S. vaccination program has exceeded expectations set out by President Biden’s administration.

“We're seeing tremendous movement in terms of the vaccinations. And that certainly is helping to keep the spread of the virus under control and rebuild some of the consumer confidence,” said deRitis. “There's a lot of pent-up demand that's out there. That's going to continue to push the economy forward.”

Second is the stimulus passed in December of 2020 and again in February of this year. “Those checks are going out now or have gone out. And that is certainly putting more money in folks' pockets,” he said. For more economic insights, listen to our new episode.

Below is an excerpt from our interview. It is edited for brevity.

Freas: We’re talking about a fifth round of stimulus, which is focused more on longer-term growth projections. What are your thoughts on this? 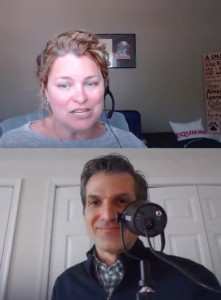 deRitis: So this is the proposed American Jobs Plan. It's been pitched in some sense as an infrastructure bill, but it's much more than just traditional infrastructure. It's about funding initiatives that hopefully would increase productivity overall and really continue economic growth or long-term economic growth. I view it as designed in part to fill some holes that we've had in our budget for a long time. I think everyone agrees on both sides of the aisle that we need to replace some of our roads and bridges. And, there are some gaps in terms of our infrastructure spending on airports and ports. We just need to modernize.

There's about $600 billion or so allocated to what you might think of as this traditional type of infrastructure. On top of that you have other types of infrastructure, which I think are also equally valid. Rural broadband, for example. I don't think there's any real controversy around that. We want to, again, modernize our infrastructure in a way that can help more people access the labor market.  So, there's a lot of things in there that make a lot of sense, but then you have other parts where there is certainly much more debate. For example, there's funding in there for elderly and disabled care. I don't think anyone really disputes that we need to fund those things. But does that funding belong in this type of infrastructure package?

Freas: Again, five rounds of stimulus. Four have already gone through. One's on the horizon again. When was the last time that we've had so much stimulus entering the market?

deRitis: We really haven't had that unless you go back to go to World War II. And it's hard to say that it was actually stimulus, right? We were fighting a war, but that was the type of level of consumer or government spending that we did. Large outlays to fight the war. That certainly had some economic effects, but since we've never really stimulated the economy in this way or in this short period of time.

For context, during the great financial crisis in 2008/2009, the stimulus we provided was about $800 billion. And that actually took several rounds of negotiation, as you recall. So, right off the bat the CARES Act provided over $2 trillion to the economy. We already more than doubled that.

So it is unprecedented. And that does open questions about some of the longer term potential consequences of running up the debt. So far, we really haven't seen any of the downsides. Interest rates have remained very low. Investors still want to lend the U.S. government money. So, nothing in the short term is really a negative. And, we've certainly seen benefits by keeping the households and small businesses alive through this period. But in the back of our minds, we also always have to be thinking about those longer term risks.

For more on consumer credit trends and near-term forecasts, listen to our full podcast on our website or search for it and subscribe where you access podcasts. And if you missed it, check out our last blog post Pent-Up Demand and Consumer Credit Expectations.

To access the latest consumer credit and small business insights, contact your Equifax account executive or visit us online. You might also enjoy checking out Economy.com by Moody’s Analytics for the latest economic updates. RESOURCES mentioned in this podcast:

Credit Risk Student Loan Debt Crisis: Experts Weigh In
During our July 28 Market Pulse webinar, our panel of experts discussed what lenders and Gen-Z should be doing during the current student lo [...]