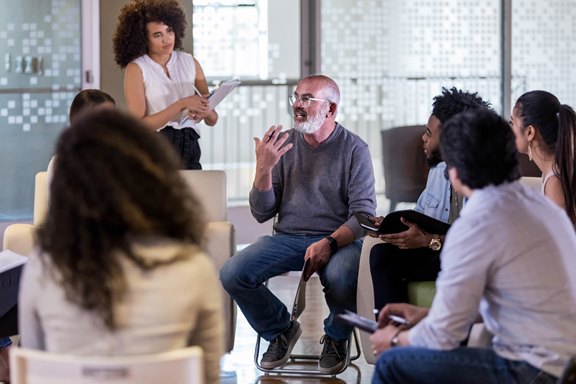 In 2019, Roger* entered the St. Louis Builds Credit office with one checking account, no savings account, no budget plan and unaware of his credit score. Kayla arrived as a single mother with five children under the age of 10, wanting to purchase a home in a better school system but couldn’t due to her credit score.

Over the course of the next year, Kayla raised her score by more than 70 points to qualify for FHA financing and down payment assistance. Roger paid off debts, opened new credit lines and boosted his score from the low 500s to the high 600s.

These are just a few examples of how St. Louis Builds Credit (STLBC) is creating life-changing improvements for people in the city’s Dutchtown neighborhood. STLBC is based on a Boston Builds Credit model, first developed by United Way, the city of Boston and local partnerships. This first-of-its kind program focused on Boston’s more than 200K residents with limited-to-no credit history, and delivered not only traditional financial education, but a true support and enablement system with access to credit building specialists, a network of resources such as credit unions, and safe credit programs. After engaging with the program nearly three years ago, Equifax Foundation President David Stiffler knew it was an immediate fit for Equifax and its foundation’s mission.

“Credit is the first step in an individual's long financial journey. If they have thin, no or bad credit, they’re denied the chance to get a car so they can get to that job that leads to stable housing so they can build a family and secure their future,” said David. “I knew the Builds Credit framework was perfect for Equifax to replicate in St. Louis.”

Equifax has a long history in St. Louis as an employer and community partner, so the company had an existing relationship with Prosperity Connection, an organization focused on the transformation financial empowerment can bring to a city. Prosperity Connections had the network and resources in place to act as the backbone agency for the STLBC effort, supported by seed funding, technical support and skilled volunteer assistance from Equifax and new partners such as U.S. Bank. The U.S. Bank Foundation’s Rebuild and Transform Fund is focused on organizations that are dedicated to increasing economic mobility through large-scale investments, making them a perfect fit in support of the STLBC mission.

“Financial education is one of the tools U.S. Bank is using to help bridge the racial and economic wealth gaps in the communities we serve,” said Kathy Siddens, community affairs manager for the St. Louis area at U.S. Bank. “We believe that by making investments in community partners doing incredible work, we can help increase economic mobility and build wealth in diverse communities.”

Gaining access to credit remains a major roadblock for millions of American adults, hindering their ability to build wealth. Eddie came to STLBC with significant personal, credit card and medical debt. He was renting a car each week to commute to his three jobs, and didn’t understand where his paychecks were going. Through non-judgmental counseling, Eddie was  able to create a budget, manage his debt and obtain a car loan -- a loan he was able to recently refinance thanks to his 725 credit score.

Eddie, Kayla and Roger aren’t alone. STLBC’s first year saw more than 1,000 participants joining coaching sessions or classes, and those who increased their credit scores saw an average bump of 33 points -- a major improvement for a community with a median credit score of 602. And now with the ongoing support of new partners such as U.S. Bank, Equifax is making major strides towards helping people live their financial best.